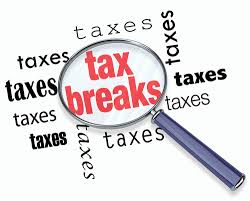 Small Business Tax Breaks in the News -This past Tuesday, the House Ways and Means Committee voted to extend six of the more than 60 small business tax breaks that expired on January 13, 2013. Although most analysts assume that the proposal will not be bought up for consideration by the House of Representatives for quite some time, the vote is none the less significant in that it favors extending the small business tax breaks permanently, rather than for some set time period. Proponents of the proposal feel that this will allow small businesses to better plan for the future and thus boost the economy by hiring new workers and making capital investments. Those who are against the proposal say that the fact that the proposal does not include tax increases or spending cuts to offset the expense of the suggested tax breaks makes it fiscally irresponsible.

The tax breaks identified in the House Ways and Means Committee package include the following: 1) the research and development tax credit, 2) the active financing exception which allows deferment of United States taxes on income from overseas finance businesses, 3) an allowance for the write-off of certain capital expenditures and 4) a provision that facilitates the transfer of funds between foreign subsidiaries. While the cost of extending the six small business tax breaks identified by the proposal is estimated at over $3 billion over a ten year period, Dave Camp, Chairman of the House Ways and Means Committee has said that they are a necessary step toward making the United States more attractive to entrepreneurs. In a recent statement, Camp was quoted as saying, “These permanent policies are an important first step to … put us on a path toward comprehensive reform that lowers (tax) rates and makes the (tax) code simpler and fairer.”

Earlier in April the Senate Finance Committee voted to extend 50 of the small business tax breaks that expired at the end of 2013. While the estimated cost of their package is much lower, it would only extend the tax breaks for a two year period. They would come up for consideration once again at the end of 2015. Most analysts believe that neither proposal will receive serious consideration until after mid-term elections in November. At that point, most feel that the temporary extensions passed by the Finance Committee are more likely to be voted into law than the permanent extensions proposed by the House Ways and Means Committee.