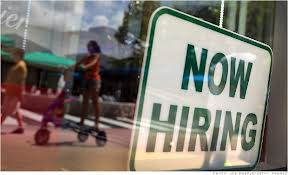 In November, the United States economy added 203,000 jobs, beating the economists’ prediction by 20,000. At 7%, the unemployment rate is at the lowest level since November 2008. This news is inspiring for the 11 million Americans who remain unemployed. The big gains this month came from the two ends of the wage spectrum – jobs that pay low wages and those that pay higher salaries. For example, while restaurants and retailers continued to create jobs, business and professional services created even more. According to Deloitte’s Chief Financial Officer, Frank Friedman, “This was a strong, good quality report showing continuing momentum.” In fact Deloitte, itself, is planning to hire 18,000 auditing and consulting employees this year.

The addition of new jobs spans all sectors of the economy. In fact, 2013 has been the best year for job creation since 2013. November statistics show the transportation sector adding 30,500 jobs, health care adding 28,000 jobs, manufacturers hiring 27,000 workers and construction companies hiring 17,000. Local and state governments hired 14,000 new employees, making up for the federal government which continued to cut jobs. As of the end of November, 7.4 million of the jobs lost in the financial crisis had been regained.

Although the employment data is improving, the job market still has a ways to go before it is back to pre-recession levels. At his point, only about 63% of Americans over the age of 16 are employed. Although this statistic is partly due to the retirement of Baby Boomers, it is the lowest level since 1978.The fact that some workers have become discouraged and given up after lengthy job searches and many rejections may also contribute to the low employment percentage. For example, when Wal-Mart opened two stores in Washington D.C., over 23,000 people applied for 600 job openings. This means that each applicant had only a 2.6% chance of being hired, very discouraging indeed! David Tovar, a spokesperson for Wal-Mart, said that it is not unusual “to get this number of applications in urban areas when there is such a need for jobs.”

Some economists think that 2014 might be the year the job market finally takes off.  If there is steady improvement, some of the workers who have been discouraged about searching for jobs might renew their efforts. Rajeev Dhawan, Director of the Economic Forecasting Center at Georgia State University, believes that the economy might be ready to soar. According to Dhawan, “If we can survive January and there’s no shutdown, we can take off.”

If your business is seeking business tax or business accounting solutions, our experienced professionals can provide you with the expertise you are looking for. To learn more about our full range of business tax and business accounting services, visit us today at www.businesstaxpreparation.com. Contact us by email at info@businesstaxpreparation.com or by phone at (866) 676-9417 to receive a free, no obligation consultation.